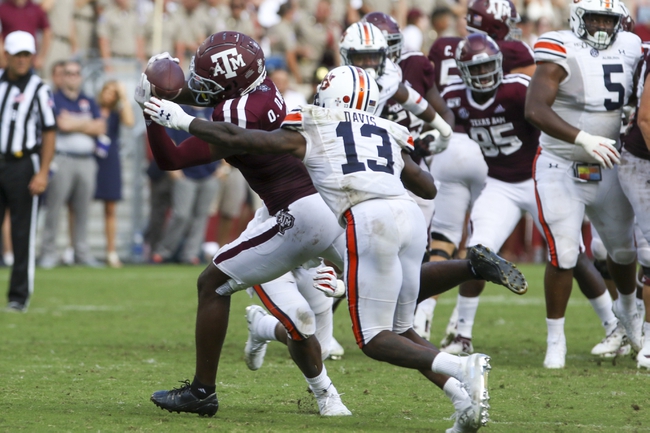 The Line: Auburn -3.0 -- Over/Under: Click Here for the Latest Odds

The Texas A&M Aggies are on the road for a matchup with the Auburn Tigers in an SEC clash.  Texas A&M finished the 2019 season with an overall record of (8-5), while Auburn went (9-4).  Auburn was victorious in the meeting last season between the two, as Auburn won on the road 28-20.  Let’s take a closer look at each program.  Get College Football predictions at Pick Dawgz.

Texas A&M will need a big game out of Kellen Mond, if the Aggies want to secure a win against Auburn.  Mond passed for almost 2,900 yards last season, while totaling 28 touchdowns.  Texas A&M will also be looking to running back Isaiah Spiller for contributions in this contest.  Spiller collected nearly 950 yards rushing as a freshman last season.  The defense will need to mirror the statline of points allowed per game, if the Aggies want to keep pace with Auburn.  Texas A&M has plenty of talent on the roster for the 2020 campaign and should have no issue out performing the 2019 team.  For more on Texas A&M, check out the team preview.

Auburn saw some young players see valuable time last season.  It turns out that those young players were some key offensive core skilled players.  It all starts with the quarterback Bo Nix.  Nix passed for more than 2,500 yards as a freshman last season.  The incoming sophomore registered 23 touchdowns last season between the air and on the ground.  JaTarvious Whitlow will be hoping to build off of a 2019 season that saw the running back total 763 yards rushing and 10 scores.  The defense was very active in trying to strip the football from the opposing teams, as Auburn recorded 15 forced fumbles.  For more on Auburn, check out the team preview.

Overview: Auburn has opened up as 3 point favorites at home for this SEC showdown.  Chances are Auburn will be coming off a road loss to Georgia the week prior to this game.  On the other hand, Texas A&M has a real chance to start the season 6-0 and should be flying high heading into this contest.  This game should come down to the wire, as both teams will have plenty of success during SEC play.  I’m going to side with Texas A&M to cover this spread, but a slim victory for Auburn at home is the end result.